'9th Annual Spinal Symposium': A Day at The Royal Society of Medicine 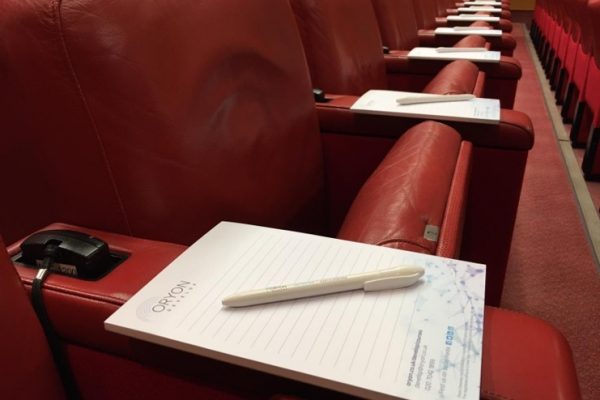 ‘9th Annual Spinal Symposium’: A Day at The Royal Society of Medicine

What a day! Oryon Develop’s 9th Annual Spinal Symposium was held at 1 Wimpole Street – home of the Royal Society of Medicine on Saturday 29th February.

Read on to get a taste of what the day involved, including some of the highlights from the talks, some pictures, and some silly anecdotes.

It was an early start for the team, arriving at the RSM before 7am to start setting up. Unfortunately, disaster struck early – Pret had to delay opening up due to staffing issues! It took all our willpower and some hastily assembled coffee from the RSM kitchen to power through this unfortunate setback, and we were set up in no time.

Once attendees started arriving, we set to work checking them all in. Everyone enjoyed some delicious pastries and coffee, shaking off the rain that was battering down on London. The view from the AV room

The day started with a quick introduction by Les Clark, our Director, who was chuffed to see such a big audience. He spoke about our other two brands, Oryon Imaging and Oryon Connect, and introduced Niamh, our new(ish) Event Coordinator.

Kicking off the day was the highly rated Paul Chatrath, Consultant Rhinologist. His talk on ‘Dizziness, Facial Pain and the Neck’ explored the difference between vertigo and dizziness, and explained how these issues can originate in the C-spine, using case studies and his own experience.

Paul Chatrath kicks off the day

He explained his diagnostic workup, giving attendees advanced knowledge on how to deal with patients who present with vertigo or dizziness at their clinics.

Our second speaker was highly lauded by attendees, addressing the complex issue of fibromyalgia, a long-term pain condition which causes pain all over the body. Dr Wolman used a variety of case studies to discuss a biopsychosocial model of pain management; a very interesting way of looking at the aetiology of conditions. Time for a coffee

A good stretch of the legs, a coffee, a pastry, and a glance around the atrium – which revealed two rather stern portraits of the venue’s royal sponsors – later, and attendees swarmed back into the auditorium, eager to learn from the next speaker. Oh, and lots of them were sporting free water bottles, which we shamelessly exchanged for social media attention (#spinalsymposium anyone?).

Dr Nikolic is a Consultant in Pain Management and Neuromodulation, but he could just as easily have been a Consultant in Comedy. He had his in stitches from the get-go, and didn’t let up for the duration of his talk. When exhibiting one of the first neuromodulators, the ‘Electreat’ from 1919, Serge commented that the extraordinary drop in reported pain after its use was probably the result of the patients desperately trying to avoid the ‘treatment’ ever again!

Serge also explained that modern neuromodulators, like electric toothbrushes, charge themselves by ‘magic’, and argued that making his presentation more interactive was ‘more fun – at least for me.’

With all comedy aside, Dr Nikolic’s talk was really insightful and will have helped the audience to adopt a more holistic approach to pain management in their own clinics.

After Serge’s interesting (and amusing) talk, we broke for lunch, which, to put it mildly, was very tasty. To put it maturely, (cheese pun), it was really delicious, featuring spinach and ricotta cannelloni, beef bourguignon, sea bass and all sorts of salad, followed by lemon tart, chocolate roulade and fresh fruit salads.

We didn’t get any photos of the food, but here’s a picture of Rob and Adriana from our team enjoying the RSM food after the delegates’ lunch. After an hour’s break, we returned to the auditorium for the fourth talk of the day, with Mr Bob Chatterjee.

As one of the leading Spinal Consultants in the UK, (or even the world), Bob could be forgiven if his talent didn’t extend to public speaking. But it does! Bob always receives great feedback from delegates, and this was no different. His talk, ‘Pitfalls in The Cervical Spine and How to Avoid Them,’ although controversial, was nevertheless backed up by Bob’s vast clinical experience. His assertion, talked through in detail, that NICE guidelines should be ignored in certain diagnoses, caused a stir! Having watched Bob’s talk, Dr Jannoun, Consultant in Interventional Sports Medicine, was suitably impressed. Presenting his own talk, ‘Sport & The Spine’, Usamah took attendees through modern approaches to spinal injuries in sportspeople, drawing on his experience as a Consultant Sports Physician at the 2012 London Olympic Games and many other sporting events. Time for one last break!

Following on from Usamah’s in-depth lecture, attendees took one last breather before the last talk. With plenty of people posting on social media about the event, our BPA-free water bottles were flying off the shelves!

Last but not least, Mr Mohamad Ahmed took the stage, delivering a lecture on ‘Degenerative Spinal Diseases and SI Joint Diseases.’ Despite his professionalism in taking attendees through these spinal issues which are commonly seen in clinic, Mohamad showed his family side by showing up to the event with a laptop that his kids had played on and accidentally broken it with a virus!

There were lots of questions after Mohamad’s talk, which was eventually followed by some quick closing remarks from Les, the Director of Oryon.

A huge thank you to all the attendees who came to the event. Despite the rain, wind and travel problems, the event was almost completely full of healthcare professionals, eager to learn something new in healthcare. Thanks also to the speakers, who gave up their time to create and deliver lectures to their medical colleagues; a really important component of collaborative working across healthcare.

And finally, thanks to the Oryon team who made this happen, in particular Niamh, the Events Coordinator, and Vesta, the Director of Transformation.

It’s official, we have a second MRI location